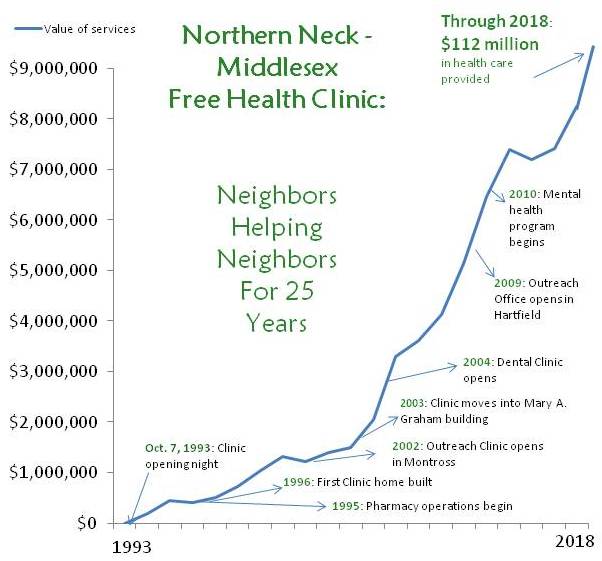 Medical Association public forum on health care. A principal goal is to establish a free clinic for the working poor who have no insurance and cannot afford costs associated with basic medical care.

1995 The Clinic’s administrative office moves from space in Chris Stamm’s law office in Kilmarnock, where it had been located since the Clinic opening, to space at the Kilmarnock Town Office. In May, a second weekly clinic for patients needing follow-up care is added, and held each Monday morning.

1995 $100,000 is donated anonymously, with the money restricted to building a Clinic facility. The donor is later identified as Phyllis Smith.

1996 The Kilmarnock Town Council authorizes a $1-per-year lease to the Clinic for property at the end of DMV Drive. Following site preparation and building work, the Clinic moves into the new facility on August 1. The modular home has five exam rooms, a pharmacy, a waiting room and administrative offices. A ribbon-cutting and open house are held to formally dedicate the new Clinic facility on October 23.

1997 The Clinic schedule expands to include two evening clinics, nurse consultations, a Woman’s Clinic, a Continued Care Clinic and a Pediatric Clinic. Office hours expand to five days and two nights each week.

1998 Through grant funding, the Clinic secures its first nurse practitioner.
In June, negotiations begin with Virginia Quality Life, organized to pool public and private resources to expand health, education and recreation resources through new facilities at one location. In August, General Colin Powell speaks at a ground-breaking ceremony for the VQL project, which involves new facilities for the Clinic, YMCA, Red Cross Chapter and Rappahannock General therapy and rehabilitation activities.

2001 In March, final plans are unveiled for the Clinic’s new 8,500-square-foot facility. The partnership with VQL is limited to raising funds for building construction only, while the Clinic raised funds to equip the facility and for all operations.
In September, a partnership is developed with VCU in anticipation of a Dental Clinic as part of the Clinic’s new building, and on October 23 the ground-breaking is held.

2002 In April, an Outreach Clinic opens at Andrew Chapel United Methodist Church in Montross and operates one day every other week to provide better access to Clinic patients living in Richmond and Westmoreland counties.
In October, a reception is held at the home of William B. Graham of Irvington, a major Clinic supporter and member of the Board of Directors, for two groups that have offered substantial funding for the Clinic since its beginning: Trigon Blue Cross and Blue Shield, and the Virginia Health Care Foundation.
In November, the Clinic’s Medicare Medication Program, begun as a pilot project, is revamped to accommodate volunteers, partner with area doctors’ offices, and screen Medicare patients in need in order to obtain medicines for them for free.

2003 The Clinic begins moving into its new facility in January. The move, made in stages to keep services uninterrupted, is completed in May, when the Sherman Curry Pharmacy is dedicated. A ribbon-cutting is held in July, and in a formal dedication ceremony the facility is named the Mary A. Graham building in memory of a major donor and supporter. In November, a ribbon-cutting is held for the Dental Clinic.

2004 The Dental Clinic opens, and volunteer dentists see their first patients on January 15. The first staff dentist is hired in May on a part-time basis. A partnership with the VCU School of Dentistry allows for student rotations through the Clinic, where they work with dentists for hands-on experiences.

2005 A six-week Pharmacy Technician training class, designed to lead to registration with the Virginia Board of Pharmacy, is developed and taught by the Clinic for those interested in volunteering and in securing employment in an understaffed field. Partnerships are finalized with the Gloucester-Mathews Free Health Clinic, to see some of those patients and to recruit volunteer dentists from that service area, and with the public schools’ Head Start program to see children from low-income families.

2006 A new Foundation Board is formalized, designed to raise funds for annual operations and for an endowment that will secure services in the future.

2007 Outreach Clinic hours in Montross are expanded
The seventh Pharmacy Technician training course is completed, bringing the number of persons successfully completing the course to over 50. The value of services provided by the Dental Clinic alone, since opening in 2004, exceeds the $2 million mark. The Clinic’s pharmacy staff receives statewide recognition when named for the Unsung Hero Teamwork Award for 2007 by the Virginia Healthcare Foundation. Irvington Baptist Church hosts a piano concert, “Return of the Romantic Pianists,” by David and Phillip Graham, as a fundraiser for the Clinic. The Grahams are the grandsons of the late William B. and Mary Graham, who were major contributors to and supporters of the Clinic. The Clinic begins its 15th year of operations. The Clinic successfully raises its first $1 million budget. The value of services provided since the Clinic’s inception totals $25.9 million.

2008 A PBS special on the success of the Northern Neck Free Health Clinic, its mission and its need, is aired on WCVE.
Clinic representatives, armed with letters from patients and volunteers, join others across the state for Legislative Day in Richmond. They are successful in an increase in state budget funds. The Clinic hosts Doctors’ Day in conjunction with the Northern Neck Medical Association. The event includes tours and a reception. An anonymous donor pledges to match what the Clinic can raise, up to $500,000, for funds for the Clinic’s endowment. A committee is formed; packages are put together including letters, brochures, Clinic information and pledge cards, and the “Endowment Challenge” is publicly announced. The Clinic hosts tours and a reception for area pastors, “A Ministry of Healing and Hope.” Pastors from churches in all five counties of the Clinic’s service area attend. Dr. Richard N. Baylor, Medical Director, receives the Medical Society of Virginia Foundation’s “Salute to Service” award for his years of volunteerism. He also announces his plans to retire as Medical Director, a position he filled on a volunteer basis for 13 years. Dr. Baylor, 85, was a founder of the Clinic and during its initial years served as Clinic President. The Clinic website is launched. The Endowment Challenge of $500,000 is met through donations received the last day of the drive. The result is $1 million for the Clinic’s endowment designed to assure services in the future. Interest generated from the endowment funds may be used for annual operating expenses. The Clinic, in its 15th year, hosts the annual state conference of the Virginia Association of Free Clinics, also in its 15th year.

2009 A new pharmacy assistant is hired to help secure medicines for Clinic patients; to assist the low-income on Medicare with obtaining medicines, picking Medicare D plans, and applying for the low-income subsidies, and to oversee the evening clinics. Dr. Richard Bagnall, a physician at White Stone Family Practice, becomes the Clinic’s first paid Medical Director, succeeding Dr. Baylor, who had filled the position on a volunteer basis. In September, Dr. Ann Kingsbury takes over as Medical Director. A new Outreach Administrative Office opens in Hartfield to better serve patients in Middlesex County. Staff and volunteers at the office are on hand each Tuesday afternoon for patient screenings for the Clinic and to assist low-income elderly, in conjunction with their doctors, to obtain prescribed medicines for free. Dr. Baylor receives a national recognition in receiving the American Medical Association’s Award for Excellence in Volunteering, presented in Washington, DC. An anonymous donor offers a 50% matching grant on up to $100,000 in new money. The Clinic raises the funds to receive a total of $150,000, cutting the budget deficit. The value of services provided in 2009 totals $6.18 million. The Clinic reaches an agreement with the Town of Kilmarnock to purchase the property on DMV Drive where its first Clinic was located. The facility there is used to house dental students from Richmond who rotate through the Dental Clinic and for meetings and other events. The purchase was made possible by an anonymous “Friend of the Mission.”

2010 The Clinic gains full accreditation in a new program offered by the Virginia Association of Free Health Clinics.
On-site mental health counseling is added, through partnerships with the Virginia Health Care Foundation and the local Community Services Board. More than $7 million worth of care is provided.

2011 Group diabetic treatment sessions are begun, and are held weekly. During the sessions, patients meet individually and as a group with medical providers and specialists to cover various aspects of diabetes – diet, nutrition, counseling, HbA1c levels, foot and eye care, and medicines – all during one Clinic visit.

A number of milestones are reached: more than 10,000 individuals served, more than 100,000 patient visits, and more than $52 million worth of health care provided.

2012 The 10th anniversary of the Outreach Clinic in Montross is celebrated.

2013 Dr. Charles Maresh becomes the new Medical Director, succeeding Dr. Ann Kingsbury.Pharmacy Coordinator Angie Rich is honored by the Virginia Pharmacist Association as Virginia Pharmacy Technician of the Year. The Clinic celebrated its 20th anniversary, and during its first two decades 12,009 individuals were served and $68 million in health care was provided. The Dental Clinic is upgraded with digital equipment and electronic health records. Board member Wallace McGinness of Montross is awarded the Mary Washington Hospital Foundation?s Lawrence and Martha McMurtry Award for Excellence and Innovation in Community Health and Wellness.

2015 The duPont Fund helps fill a new Nurse Navigator position. Space is provided to Enroll Virginia and the Virginia Poverty Law Center to help those who qualify to obtain insurance through the Affordable Care Act. Space also is provided to Rappahannock Legal Services for low-income residents needing legal advice. Dr. Matt Vogel is honored for his 14 years on the Board of Directors, including three terms as President, and his two decades of volunteerism. The value of health-care provided exceeds $81 million, with more than 13,500 individuals served.

2017 The Clinic begins its 25th year. The value of services provided since its founding exceeds $100 million. The CVS Foundation helps fund a new pharmacy technician position to expand services.