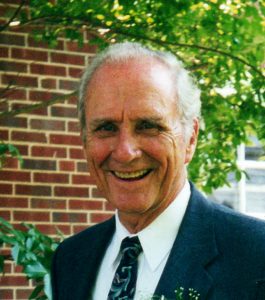 Dr. Richard (Dick) Baylor, who passed away November 11 at the age of 97, was one of those gentle giants whose gifts to the community are profound and lasting.

This area was the beneficiary of his decision to retire here, after a 51-year career, and pursue a lifelong dream of making health care available to the underserved and uninsured. In 1992-93 he helped organize the Health Action Group, which led to the creation of the Northern Neck – Middlesex Free Health Clinic, where he spent the much of the next two decades as its Medical Director, Board member, and all-around cheerleader.

Dick’s positive, joyful demeanor, genuine compassion, broad smile, and spirited walking routine were inspiring and uplifting. During the final quarter of his life, the Clinic grew from operating one night a week in borrowed space to operating five days and two evenings a week, serving thousands in its medical clinic, dental clinic and pharmacy. Despite his unassuming character he was recognized repeatedly, by the Medical Society of Virginia, Medical College of Virginia, Virginia General Assembly, and American Medical Association, among others. Kilmarnock’s Baylor Park was named in his honor as well.

A portrait and tribute to Dr. Baylor hang in the Medical Clinic at the main facility in Kilmarnock. “Noble and Compassionate,” the plaque notes. “Leader and true advocate…. A visionary.” He was the Clinic’s Founding President from 1993-1996 and Medical Director from 1997 to 2010, when he returned to the Board of Directors, serving through 2016.

His passion and concern for Clinic patients never wavered, and over the years his vision and volunteerism led to the Clinic serving more than 16,000 unduplicated patients and delivering $120 million worth of health care services. Volunteers have given over 400,000 hours to further his dream.

Dick Baylor is the father of the clinic. Thousands of people are the better for his efforts, and we are forever grateful for his generous spirit and life well lived.