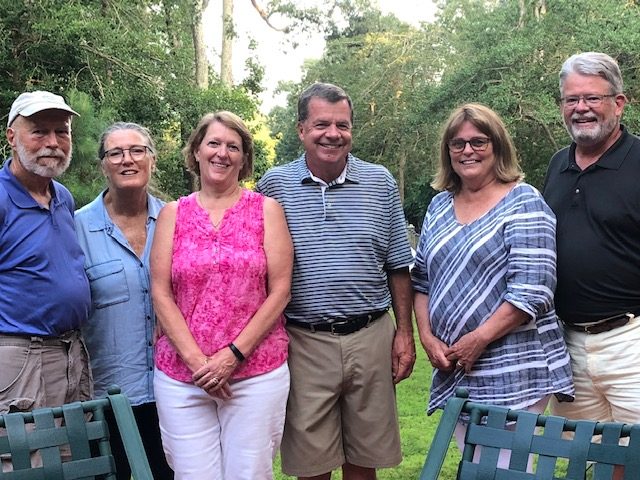 The Northern Neck – Middlesex Free Health Clinic (NNMFHC) celebrated its Vaccination Clinic volunteers on Friday, July 16, at the home of Bob and Sandi Sutherland near Kilmarnock.

The Sutherlands were two of the 53 volunteers who ran the weekend and weekday vaccine clinics for the community. The NNMFHC, working closely with the Virginia Department of Health (VDH), started its vaccine clinics the first week of February and continued them until the vaccines became more generally available at doctors’ offices and pharmacies. Vaccines are still available and vaccine clinics are scheduled as needed.

Held mostly outdoors, vaccines were administered to individuals in their vehicles. Large clinics of 100 to 200 vaccines were held on Sundays, when the parking lot was more open, and smaller sessions were held on weekdays at the same time regular medical and dental services were being provided indoors. Vaccine volunteers included those who helped with scheduling, calls, parking, running paperwork into the pharmacy, writing out vaccination cards, preparing and administering the shots, and watching vaccine recipients for any side effects.

About 3,000 vaccines have been administered on the Clinic grounds since that first week of February. They were given to essential workers in the community, those on the VDH vaccine lists, and qualified Clinic patients. The Clinic handled more than 7,000 phone calls to schedule the first and second shots and for appointment reminders.

During the celebration at the Sutherlands, a number of volunteers noted how grateful vaccine recipients were when they received their shots, and how smoothly and efficiently the vaccine clinics were run.

“Volunteers came together to deliver an invaluable service to the whole community,” Clinic CEO Jean Nelson noted. “Our phones didn’t stop during that time, and many who could not get a vaccine scheduled elsewhere were delighted to land at the Clinic for their shots. We received many compliments on the service and the volunteers.”